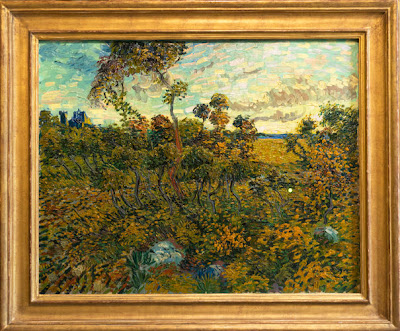 By NINA SIEGAL
Published: September 9, 2013
AMSTERDAM — For roughly a century, the painting “Sunset at Montmajour” was considered a fake. It was stored in an attic and then held in a private collection, unknown to the public and dismissed by art historians. But on Monday, the Van Gogh Museum declared the work a genuine product of the master, calling it a major discovery.

“Sunset at Montmajour,” painted in Arles in 1888, “is a work from the most important period of his life, when he created his substantial masterpieces, like ‘Sunflowers,’ ‘The Yellow House’ and ‘The Bedroom,’ ” said the museum’s director, Axel Rüger, in an interview. The painting depicts dusk in the hilly, forested landscape of Montmajour, in Provence, with wheat fields and the ruins of a Benedictine abbey in the distance. The area around Montmajour was a subject that van Gogh revisited often during his time in Arles.

“One or two early van Goghs do sometimes come out of the woodwork now and again, but from the mature period, it’s very rare,” said James Roundell, an art dealer and the director of modern pictures for the Dickinson galleries in London and New York, which deals in Impressionist and modern art.

Mr. Roundell said it would be hard to predict precisely how much “Sunset at Montmajour” would fetch on the market, but expected it would be “in the tens of millions and quite a few of them.”

Fred Leeman, a former chief curator of the museum and now an independent art historian and van Gogh scholar based here, said the work, which he called “100 percent genuine,” contributes to an alternative understanding of the artist. “We have the impression of van Gogh as a very modern painter, but here he’s working in the tradition of 19th-century landscape painting,” he said.

The painting has been in the collection of a family for several years, and Mr. Rüger said that because of privacy concerns, he couldn’t release any more information about the owners.

Until 1901, the painting was in the collection once owned by van Gogh’s brother, Theo, said Marije Vellekoop, the head of collections, research and presentation for the museum. His widow, Johanna van Gogh-Bonger, sold it to a Paris art dealer. In 1908, the art dealer sold it to a Norwegian collector, Ms. Vellekoop said. Shortly after that, she added, “it was declared a fake, or not an original,” and the Norwegian collector banished it to his attic, where it stayed until he died in 1970. The current owners purchased it thereafter.

They took it to the Van Gogh Museum in 1991, Mr. Rüger said, but at the time, experts there said they did not think it was authentic. Two years ago, the owners took it back to the museum, and researchers from the museum have been examining it ever since, Mr. Rüger said. Louis van Tilborgh, the museum’s senior researcher, said that since 1991, the museum has developed several new techniques for identifying and authenticating works of art. He said that all those methods were put to use when researchers had the chance to look at this painting again.

According to Mr. van Tilborgh, it was painted on the same type of canvas with the same type of underpainting van Gogh used for at least one other painting of the same area, “The Rocks.” The work was also listed as part of Theo van Gogh’s collection in 1890. It has “180” painted on the back, which corresponds to the number in the collection inventory. “That was the clincher,” he said.

Mr. Rüger added: “This time, we have topographical information, plus a number of other factors that have helped us to establish authenticity. Research is so much more advanced now, so we could come to a very different conclusion.” The last major van Gogh brought to light, the museum said, was the 1888 painting “Tarascon Stage Coach,” in the 1930s. The date of “Sunset at Montmajour” has been identified as July 4, 1888. In a letter van Gogh wrote to his brother the next day, he seemed to have described the scene:

“Yesterday, at sunset, I was on a stony heath, where very small, twisted oaks grow, in the background a ruin on the hill, and wheat fields in the valley. It was romantic, it couldn’t be more so, à la Monticelli, the sun was pouring its very yellow rays over the bushes and the ground, absolutely a shower of gold. And all the lines were beautiful; the whole scene had charming nobility.” (He was referring to the works of Adolphe Monticelli, one of the first painters van Gogh admired when he moved to Paris in 1886, and who played a role in van Gogh’s decision to move to Provence.)

“Sunset at Montmajour” is comparable in size to “Sunflowers,” which was painted the same year and sold for $39.9 million in 1987 at an auction at Christie’s in London.

Van Gogh moved to Arles in February 1888 and spent time exploring the landscapes in Provence, and doing work “en plein air,” or in nature. He was particularly fascinated by the flat landscape around the hill of Montmajour, with its rocky outcroppings and hay-colored fields.

In a letter dated July 1888, he said that he had been to Montmajour at least 50 times “to see the view over the plain.”

Mr. Leeman, the historian, said that “in hindsight, many pointers in his letters and entries in catalogs of the 1900s have been linked to other paintings or misidentified,” adding, “Here, we see a painting that fits those descriptions exactly.”

The painting will be on view at the museum for one year, starting on Sept. 24, as part of the current exhibition, “Van Gogh at Work,” which focuses on other new discoveries about the painter’s artistic development. Mr. Rüger said the current owners have not indicated what they intend to do with it after that.
Posted by stan anderson at 2:47 PM